We are pretty used to UnderTech UnderCover products being in high demand. After all, they are handmade, right here in the U.S. of A., using time-tested designs and the highest quality fabrics on the planet. Now we’ve gotten used to the UTUC product line being one of our highest sellers; they have been for years. But even we were a bit skeptical when, last September, Lenny told us we were about to launch one of the hottest UTUC products we’ve ever offered. He told us that the demand for this product was going to be sky-high, more than we could possibly imagine. He also predicted we would get more media interest on this product than we’ve ever had before. Despite these wild sounding predictions, Lenny actually vastly underestimated the response we got when we introduced the Original Concealment Leggings – 3/4 Length on October 9, 2015.

Nearly every magazine that has anything to do with concealed carry immediately asked for press samples. This was from a photo shoot for Concealment magazine.

Introduced as a pre-order* —basically so we knew how many to make— the demand immediately went through the roof. So much so, we had to increase our order to the factory three times before the first batch was finally made, delivered to us, and shipped to those lucky customers who got in on the initial pre-order. 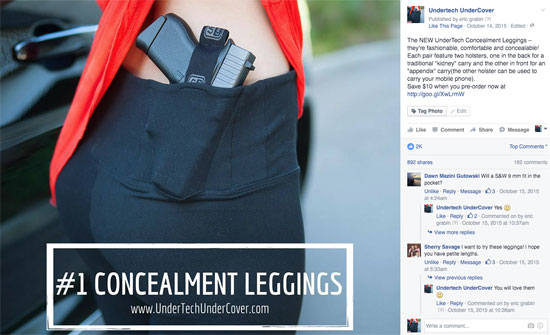 The OCL-3/4 Length pre-order was initially announced October 9th, 2015, on our Facebook page. The orders immediately began pouring in and basically have never stopped!

Those who didn’t get in on that initial order had to wait until the next production date to get their Concealed Carry Leggings, which was an additional three weeks! This is because, unlike the vast majority of our other UnderTech UnderCover concealed carry clothing products, the leggings require a special type of sewing machine and a very experienced operator. So instead of making these in our own sewing factory, we contract them out to a clothing company in Los Angeles that specializes in this type of clothing.
For every production run, we have to tell them how many pairs, in what hand draw, and in what sizes we want. And we have to give them this information nearly a month before they actually make them!That’s why if you’re one of the literally hundreds of customers who’ve been asking for the Original Concealment Leggings in a Full-Length version, now is your time to act! When you take advantage of this Opportunity for the new Original Concealment Leggings – Full Length, you’ll not only be one of the first in the county to receive them, you’ll also be getting them at 11% Off The Regular Price! We’re currently scheduled to receive the very first shipment of the new leggings on Monday, May 23rd. With your pre-order in place, you’re guaranteed that your order, no matter how many pair you get, will be in that first shipment… again, at 11% Off The Regular Price!
The Original Concealment Leggings – Full Length are basically the exact same leggings as the 3/4 length version. They have the same two integrated holsters, in your choice of right or left-hand draw. They’re made from the same top quality fabric used for the designer leggings sold in fashion boutiques and high-end department stores. They also offer the same great fit and finish of our 3/4 length version. The only difference is that these have full-length legs; a style with even more options for dressing up, or down, as you see fit and the occasion requires. 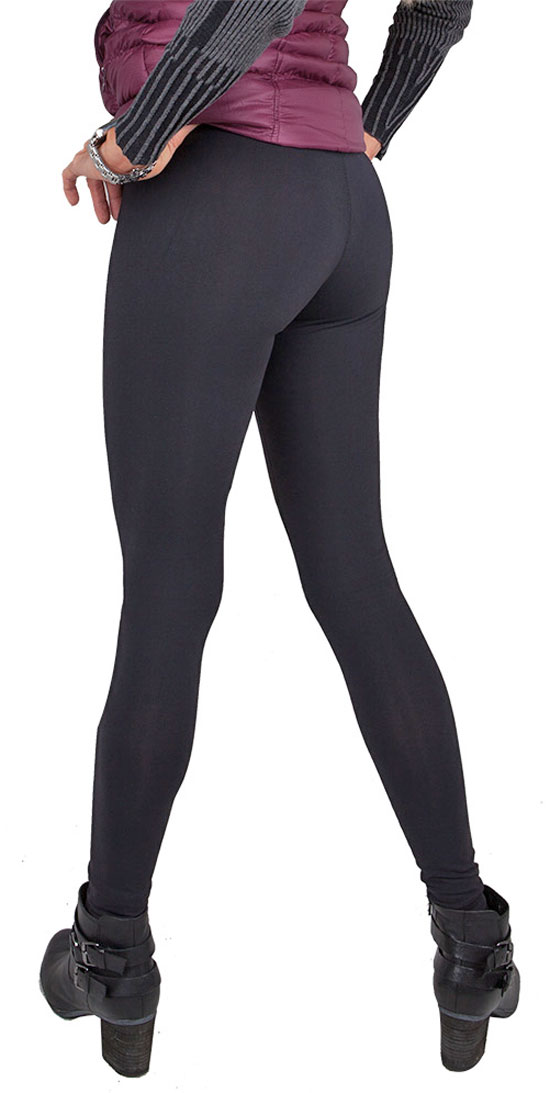 Three weeks ago, Lenny told us that the new Original Concealment Leggings – Full Length might even be more popular than the 3/4 length versions. This time, I’m not doubting it for a second, and neither should you! Getting 11% off the list price as well as being guaranteed to be one of the first people in the country to receive them… concealed carry doesn’t get much better than this.

*Pre-Order products are billed when we receive the order.
Share